Enochian is a mysterious language that 16 th century occultists John Dee and Edward Kelley recorded in their private journals. They claimed this ‘celestial speech’ allowed magicians and occultists to communicate with angelic realms.

In the year 1581, occultists John Dee and Edward Kelley, claimed to have received communications from angels, who provided them with the foundations of a language with which to communicate with ‘the other side’.  This ‘angelic’ language contained its own alphabet, grammar and syntax, which they wrote down in journals.  The new language was called “Enochian” and comes from John Dee’s assertion that the Biblical Patriarch Enoch had been the last human to know the language.

Dr. John Dee, 1527-1609, was an occultist, mathematician, astronomer and astrologer who lived in Mort Lake, West London for most of his life.  An educated man who studied at St. John’s College in Cambridge, was eventually accepted into influential circles of the ruling elite and acted as scientific advisor and confidant to Queen Elizabeth I.  He is associated with coining the phrase ‘British Empire’.  During the early part of his life, Dee had little interest in the supernatural.  Later on, he became disillusioned with science and began experimenting with magic and the occult.  Dee was looking to discover lost spiritual knowledge and recover the wisdom he believed was hidden in books of antiquity.  Among these books was the then-fabled Book of Enoch , which he conceived as being a book describing the magic system used by the Patriarch in the Bible. 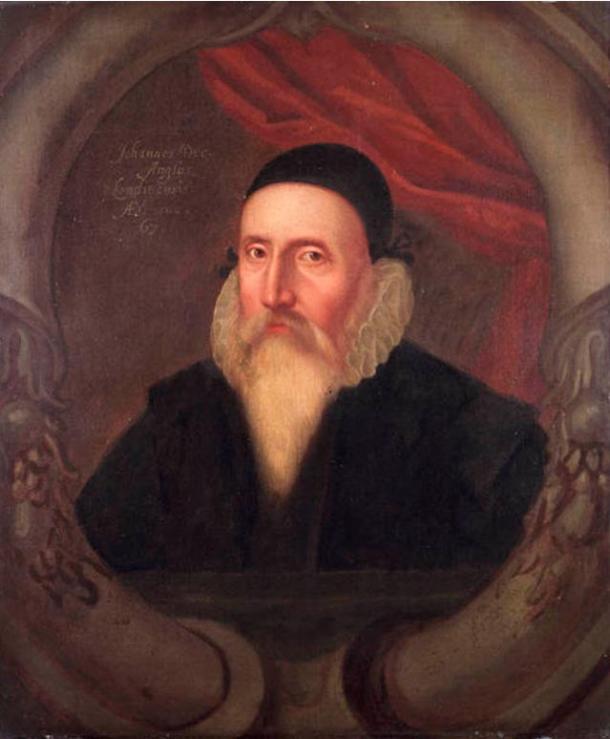 Portrait of John Dee painted during the 17th century by an unknown artist. It is taken from the National

Enochian, Language of the Angels

The term Enochian comes from the Biblical figure Enoch, who was a source of hidden mystical knowledge and was taken up to heaven.  According to Genesis 5:24, he “walked with God” and Hebrews 11:5 states that he “was taken from this life, so that he did not experience death.”

From 1581 to 1585, Dee began performing a long series of magical events.  In 1581, at the age of 54, Dee wrote in his personal journal that God had sent “Good Angels” to communicate directly with mankind.  By 1582, he was collaborating with fellow occultist and seer Edward Kelley (1555–1597) to communicate with these angels.  Hundreds of spirit conversations were recorded, including what they claimed was an angelic language called Enochian, composed of non-English letters.  The Enochian Alphabet was revealed to Dr. John Dee and Edward Kelley during “scrying sessions”, when various texts and tables were received from angels.  Scrying is a technique used by seers, psychics, and sorcerers to foretell the future and involves gazing into a reflective surface to receive messages.