7 novels full of suspense, no secrets

“Sometimes it’s easy to slot a book into a category or genre: romance, crime, or indeed, mystery. But there are lots of novels which are too slippery for that.”

Publishers, booksellers, and many readers like to know the genre of a novel. Where will it sit on the bookstore shelf? How to categorize it online? Which types of readers will it appeal to?

Sometimes it’s easy to slot a book into a category or genre: romance, crime, or indeed, mystery. But there are lots of novels which are too slippery for that. They have plenty of suspense and often a good dose of secrets and the unexplained to propel the story forward, even though their premise is not built around a central mystery which follows a trail to a satisfying conclusion.

My novels have often been categorized as mysteries and although I’m okay with that, I don’t write them with that genre in mind. But I do try to use suspense in a number of ways. In my fourth novel, Unsettled Ground, a close reader might see some clearly placed clues in the first chapter, but whether a reader does spot them or not, the suspense which builds and the revelations that are scattered throughout the novel are more about the protagonist, Jeanie, discovering these surprises, rather than the reader.

One way a skilled writer can create suspense is to make us—the readers—develop it in our own minds. Leave just enough unsaid, and we will fill in the gaps. And the images in our heads are always worse than the reality. That’s why a writer or a screenwriter should never actually show the monster.

Another way to create suspense is to not allow the reader inside the head of the character who is able to provide the answers, and instead show us only glimpses through the eyes of others. Or alternatively, have the reader so close inside the protagonist’s head we experience their confusion and are kept in the dark for as long as they are.

Sometimes writers will show us the “terrible thing” right at the start of the book, and then circle back in time, as with The Secret History by Donna Tartt. There’s no mystery about what was done or who did it, but the suspense is created by making us guess when it is going to come and why the terrible thing was done.

Whichever suspense techniques I might use, when a reader contacts me after they’ve read one of my books to tell me that the suspense kept them reading long into the night, I know I’ve done my job.

Here are six recommended novels which aren’t mysteries but are full of suspense. 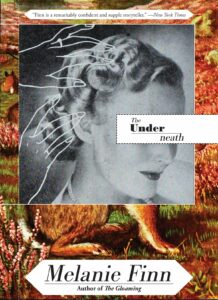 The Underneath by Melanie Finn

Kay is spending the summer with her family in Vermont when she becomes obsessed with needing to discover who owns the house they’re renting and where the owners are now, until she puts this need for the truth before her own family. In flashbacks we learn about her time as a journalist in Uganda, and what choices she made then about truth versus family. All the way through Finn lets us think the worst and then deftly illuminates the thought as our own: a sinister noise in a basement turns out to be a trapped cat, a secret cubby hole in a bathroom with the latch on the inside could simply be a place to hide. 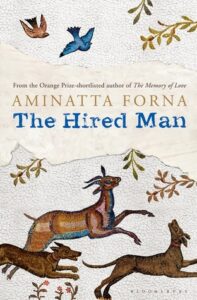 The Hired Man by Aminatta Forna

Duro is an odd-job man who is hired to help renovate The Blue House on the edge of a Croatian village after the house has been bought by Laura, an English woman there for the summer with her two teenage children. The family is unaware of the history of the house, the land and the people, and as Duro helps them reveal a mosaic of a bird on the front of The Blue House, what happened to the previous occupant—Duro’s first love—is also slowly revealed to the reader in flashbacks. Forna writes about the lasting effects of civil war in a such understated way that the suspense gradually creeps up on the reader until we have to know what happened. 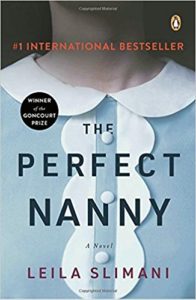 Slimani lays it all out in the open from the very start, with her first line, “The baby is dead.” This is no mystery novel; it begins with us knowing that the nanny has attacked the children in her care. But the immediate jump back in time following the scene of devastation in a family’s Parisian home means that the suspense is also not who did it but why. Slimani keeps us on tenterhooks, making us read meaning into every minor irritation or grumpy exchange between the characters, looking for a reason why the nanny committed such a terrible crime. 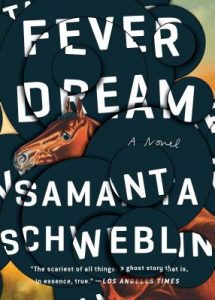 Amanda lies dying in an Argentinian hospital, and beside her, a boy called David listens to her stories. As David hurries her over parts which he deems unimportant as though Amanda needs to get to some central revelation, the sense of urgency builds in the reader until it’s almost unbearable.  Amanda tells David a story she heard from his mother about how half of David’s soul has been replaced with a stranger’s. The beginning of this debut is sinister and cryptic but not so cryptic that it’s difficult to go along with. Schweblin plants seeds all the way which make us question what is real and what is in Amanda’s head, until finally everything becomes clear, but no less horrific. 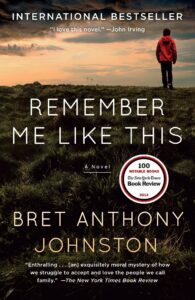 Justin has been missing—abducted—for four years when he is returned to his family, aged fifteen. Of course, his return is what they have been waiting for all this time, but Justin doesn’t reveal much of what happened to him even while his family are desperate to know. The reader, with increasing shame, feels the same tension and suspense but Johnston keeps us wanting. He shifts viewpoint around the family but never lets us inside Justin’s head. 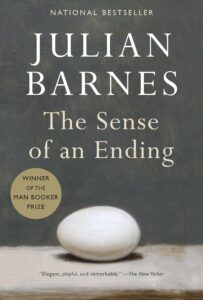 The Sense of an Ending by Julian Barnes

In the first half of this short novel, Tony now age sixty-something is remembering his school days and the time he split up with his girlfriend, Veronica. His best friend, Adrian started going out with her, and Tony recalls a letter he sent to Veronica. In the second half of the novel, we realise at the same time as Tony, that memory is fallible and everything he believed about Adrian and Veronica is incorrect. The suspense comes from the information that Veronica withholds. She complains that Tony, “doesn’t get it”, and he actually doesn’t get it and neither does the reader, until the very end, when the different parts of the puzzle can be put together.