Ai Khanum, the Capital of Eucratides

Ai Khanum (also spelled Ai-Khanoum or Ay-Khanum, lit. “Lady Moon” in Uzbek), was founded in the 4th century BC, following the conquests of Alexander the Great and was one of the primary cities of the Greco-Bactrian kingdom.

The site is located in the northern part of modern Afghanistan, in a little plain between the Amou-Darya and the Kokcha. In 1961, the Afghan king Mohammad Zaher Chach, hunting, discovered here what seems to be one of the most beautiful Greek towns in Central Asia. Three years after, the excavations began supervised by the French Paul Bernard, from 1964 to 1978. The Russo-Afghan war, and then the civil war and the Taliban occupation forced the excavations to stop, and even if since 2006 the French archeologists can cautiously go back to Ai Khanum, the site was severly damaged by looters and fights betwenn Talibans and Massoud’ forces.

The name of the town is still unclear to us today. It was proposed that Ai Khanum was the site of Alexandria of the Oxus (Oxus beeing more or less the today Amou-Darya), but Claude Rapin showed recently that Ptolemy confused Oxus and Occhus (his confluent), so that Alexandria probably was Termez. The town must have been called Eucratidia for a time, but Eucratides (c.170-c.138 BC) was the last Greco-Bactrian king to rule it, so it could have been a second name for a symbolic refoundation. Maybe the site town of Oskobora, mentioned by Ptolemy, could have been his name, but it’s uncertain.

The town measures 2km in length and 1,5km in width, divided between upper and lower city like most of the Greek towns. There is a main street, and most of public buildings are of Greek style, but the plan is not strictly hippodamian. In fact, the city shows a lot of Greek style but also some Iranian influences.

There are 4 major phases of construction in this town:

The state of excavations cannot let us have a clear general look at the town, but some buildings, especially from the third phase, are enough known to say something about it. 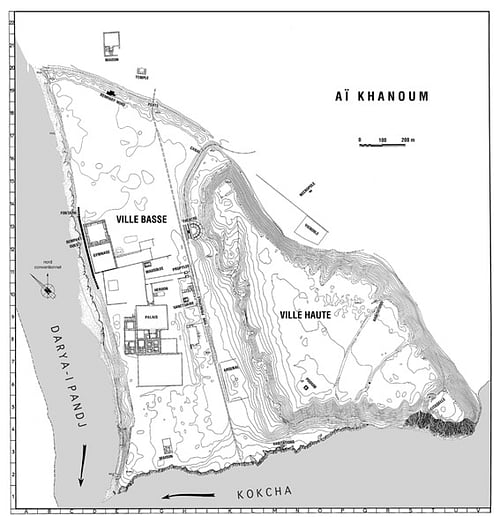 At the center of the lower city lays the Heroon of Kineas. This is a shrine probably dedicated to the founder of the town. This heroon was firstly (phase one) small, and then a pronaos and a terrace were added to it. It was made of raw bricks molded by grey or reddish earth, with Greco-Orientalisitc style noted by the presence of a cella. The building probably never was a somptuous one, it wasn’t the aim. On it was inscribed a part of the Delphic maxims, a series of proverbs as much advice for the life of the citizens. They were quotes of a certain Clearchos, maybe the Clearchos of Soloi, a Greek philosopher of the peripatetic school.

Some temples were found near this heroon, and another outside the town. There is a stone vault mausoleum near the heroon. A hundred feet south lays a temple with niches, in which a plate with the picture of the phrygian goddess Cybele was found. In this major temple of the town a giant foot of Zeus was found (identified by the thunder on his sandal). By comparing this foot (3x the human length) and the height of the temple, we know that it was part of a seated statue. Now a coin of the Indo-Greek king Hermaios shows a god (Zeus-styled) enthroned, with sunbeams around the head, something typical of Mithra. A link was made between the two and it is probable that a cult to Zeus-Mithra, a syncretic god, occured here under the Greco-Bactrian rule.The architecture of those temple is almost-fully orientalistic, with podium and terrace in degrees for example. 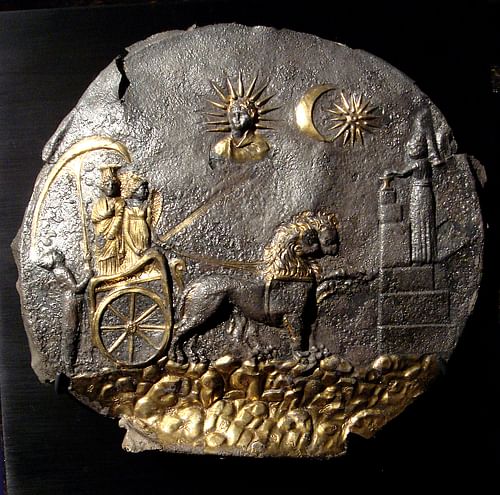 The palace is an impressive piece of architecture. It is located on the city’s center, near the temples. It was constructed in third phase, even if there was probably something here before. The palace itself is a square of 200m long sides, included in a larger structural system. In his principal entrance were 160 triple-rowed columns of 10m height. The palace is built in a architectural splendour typical of orientalistic and post-Alexander buildings, similar in some ways to Darius’ palace at Susa. In this temple complex a treasury was found which yielded many inscribed ostraca (pottery shards).

A gymnasium was found too, with a statue of the god Hermes, god of the traders but also of the speakers and of the athletes. The rooms were arranged around a central court, like today’s models of school.

The city was surrounded by 12m high walls, even on the riversides. The town was in a strategical location, near to a road passing over the Occhus river, a natural frontline between the nomads in the North and the Greco-Bactrian kingdom to the South.

Leaving aside the other buildings, some really interesting objects were found too. The ostraca of the treasury were especially about coins, and lot of coins were found just outside the town. In those were attic-standard coins, but also Indo-Greek ones and karshapana, typical Indian ones. The crowding of those three type of coins shows the situation of this town, between two cultural area.

Another example is a rich pendant that is made with coral from the Mediteranean Sea, pearls from the Persian Gulf, lapis-lazuli from Bactria and ruby from Burma. It seems that Ai Khanoum was a cosmopolitan town, ruled by a Greek elite but populated by many locals, Bactrians and Indians. Cultural syncretism was probably a reality here, with Greco-Iranian gods, trade and products from every part of Central Asia. The town was well-located on the vast trade route between India, China, and the nomads who held the gold from Altai mountains, and the Mediterranean world via the Parthian Empire.

After being built at the very beginning of Hellenistic period, the town must have been enlarged and embellished by the Seleucids and then the first Greco-Bactrian kings. Even if at this time, the royal capital was Bactra, the city was probably the chief town of this area. When Eucratides made his career as a general in Sogdiana, he probably seated his power in Ai Khanum, and began the second big phase of embellishment; it continued when Eucratides became king, building the palace as it was found in the excavations.

Yet Eucratides had many struggles, against Greeks, his own son and nomads in the North. The nomadic Sakas took Ai Khanoum between 145 and 138 BC. They barely settled themselves in the city and other nomads, the Yuezhei, repelled them and finally destroyed the city.

Ai Khanum is a perfect example of what could have been a Greek city in this Greek-Far East. It perfectly shows a mix of Greek style and Orientalistic conceptions, with products coming from all over Asia and gods from all neighbouring cultures. It tells alot about the acculturation, which seem to have gone both ways according to the populations, to create an original culture. Shamelessly, it’s also a perfect example of what becomes the historical heritage in its regions and the evil that can be on a theologistic state, for the knowledge of its own past.