THE REAL DANGERS OF CONSPIRACY FICTION

On April 19, 1995, Timothy McVeigh, a former Army soldier, parked a Ryder rental truck outside the Alfred P. Murrah federal building in Oklahoma City. The truck was loaded with a two-ton ammonium nitrate and diesel fuel bomb. McVeigh lit two timed fuses and stole away in a getaway car. At 9:02 A.M., the bomb exploded, obliterating the building’s façade and pancaking nine floors of office space. One hundred and sixty-eight people were murdered and over five hundred were injured. Until 9/11, it was the most destructive act of terrorism on American soil. It remains the deadliest homegrown terrorist attack in the U.S.—for now.

Later, when McVeigh was arrested on a weapons charge during a traffic stop, clippings from the 1978 novel, The Turner Diaries, were found in his car. “The real value of our attacks today,” one clipping read, “lies in the psychological impact, not in the immediate casualties. For one thing, our efforts against the System gained immeasurably in credibility. More important, though, is what we taught the politicians and the bureaucrats. They learned today that not one of them is beyond our reach. They can huddle behind barbed wire and tanks in the city, or they can hide behind the concrete walls and alarm systems of their country estates, but we can still find them and kill them.”

The “System” refers to the U.S. Government, which, in the novel, is run by Jews and white “race traitors” who seek to destroy the white race. Written by William Pierce, a former physics professor at Oregon State University, under the pseudonym, Andrew McDonald, The Turner Diaries is a lurid story of genocidal violence meant to “cleanse” America of ethnic minorities to create a utopian white ethno-state. The book is a sort of white supremacist thriller and is considered the “Bible” of the white nationalist movement—and a blueprint for revolution. Early in the plot, Earl Turner, a member of The Order and the “hero” of the book, blows up the Federal Bureau of Investigation building in Washington DC with an ammonium nitrate and diesel fuel bomb hidden in the back of a rental truck. Seven-hundred people are killed.

Just as McVeigh did in real life, Jacob Clay, the troubled teenage antagonist in my novel, The Recruit, finds homicidal inspiration in The Turner Diaries. Set in 1987 Southern California, The Recruit dramatizes the rise of a new kind of anti-US government white supremacy as it clashes with the growing Vietnamese refugee population. Jacob, a fifteen-year-old who is abused by his Vietnam veteran father, is indoctrinated into a racist terrorist cell bent on attacking people of color. As part of his indoctrination, the leader of the cell gifts Jacob The Turner Diaries, allowing Jacob to vicariously experience an act of violence he wishes to commit.

A more sinister fiction, though, one presented to him as fact, gives Jacob intellectual justification for his hatred. Around the time of The Turner Diaries publication, the term Zionist Occupational Government (ZOG) began to get traction among the extreme-right. In this conspiracy theory, the US Government is run by a cabal of rich Jews and “race traitor” whites who control the banks, media, and levers of government and seek to destroy America and the white race. Racist bulletin boards on the fledgling internet, such as Aryan Nations Liberty Net, spread the theory in the early 1980s. In 1984, a group called The Order, driven by hatred of this fictional government and fear of white extinction, murdered a Jewish radio talk show host on his driveway in Denver and then committed a string of violent robberies to fund a revolution to topple the U.S. Government. It is this fear of white extinction, this imagined white genocide, that convinces Jacob that he is a soldier defending the white race.

You may hear echoes of older fictions in The Turner Diaries and the Zionist Occupational Government. These conspiracies—that a secret society of rich Jews control the world and are trying to destroy white Europeans—harken back to the “greedy Jewish merchant” stereotype and the blood libel lies of Middle Ages Europe. The Protocols of the Elders of Zion, first published in Russia around 1903, which purports to reveal a secret Jewish plan to take over the world, coincided with the worst of the pogroms in Russian held territories of Eastern Europe. Later, the Nazi party published dozens of editions of the Protocols in Germany between 1919 to 1939, helping to set the stage for the Holocaust.

There are other fictions white supremacists use to justify their hatred. The “two-seed theory” tells us that Satan, in the form of the serpent, slept with and impregnated Eve. Satan’s child was Cain, while Adam and Eve’s was Abel—the first “white” child. The Jews, according to the theory, are literally descended from Satan, and have been trying, from the very beginning, inside Eden no less, to destroy white people. The “great replacement” theory tells fearful whites that they are experiencing a slow genocide and will be replaced by non-white immigrants to the United States. No doubt some will read my novel and think these theories are fictions I created, but my imagination is not that vast. Many reading this article will be shocked that anyone can believe such fictions, yet the Anti-Defamation League estimates that as many as 50,000 followers of the Christian Identity movement, a conglomeration of “Christian” churches who preach the two seed theory, are active in the United States. And the Buffalo shooter, before murdering ten people in a grocery store in a mostly Black neighborhood, left a manifesto railing about white people being replaced.

I finished The Recruit a few weeks before the January 6 attack on the Capitol. If you look closely at the videos from that day, among the symbols you’ll find on the attackers clothing and tactical gear—the Confederate flag, the Proud Boys Punisher face, the Three Percenters “III”, the Kekistan flag—is the “Q” of QAnon. The conspiracy theory internet phenomenon repackages the older fictions that motivated Hitler, McVeigh, and The Order, and declares that the world is run by a cabal of liberal globalist cannibalistic pedophiles who control US and Global politics, banks, and the media. Q, the anonymous insider whistle blower, tells us that President Trump is secretly fighting this “deep state” and will bring about the “Storm” in which he will arrest thousands of liberal elites, destroy the pedophile ring, and usher in a new utopia in America. When President Trump lost in 2020, QAnon followers felt the election was stolen by the “deep state”, a conspiracy President Trump stoked for months, right up to the “Stop the Steal” rally on January 6. On Twitter the night before the rally, Ashli Babbitt, the former Air Force soldier who was fatally shot while trying to break into the Speaker’s Lobby, wrote, “They can try and try and try, but the storm is here and it is descending upon DC in less than 24 hours….dark to light!”

Fiction can be a powerful thing, sometimes more affecting than the truth. As a writer of thrillers, it is my job, in part, to entertain readers. Beyond entertaining, I construct my fictions in hopes of understanding larger truths about people and the world. Good writers, I believe, at least the ones I love, act out of such generosity and honesty when they craft their stories.

Malevolent writers understand the power of fiction, too. These writers craft their narratives to obscure the truth about people and the world, to create dehumanizing libels. When fictions are created to amplify destructive lies, they become propaganda used as a tool to destroy. The first person in medieval Europe to utter the blood libel lie did so in hopes of causing destructive action. The same holds true for the author and publishers of the Protocols of The Elders of Zion and for William Pierce.

Whoever the QAnon author is, they are not motivated to find truth. They use their fictions to cause divisions that compel people to take ugly action—to turn fiction into reality. A hint to the power of such fictions is evidenced in the fact that some of the many law enforcement officers who stormed the Capitol on January 6, men and women bound by the thin blue line, brutally attacked other police officers that day.

In The Recruit, Jacob Clay carries these fictions with him and makes them into a terrible reality—just as Timothy McVeigh did, just as the Buffalo terrorist did. Nearly every week in America, it seems, we are forced to bear witness to the lies malevolent fiction writers tell. 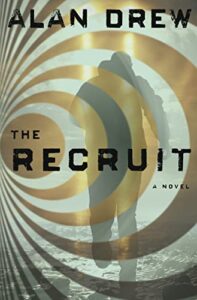