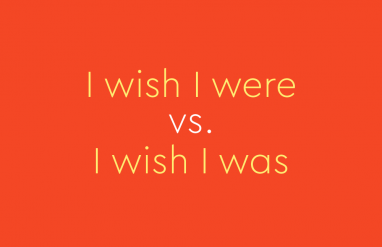 Picture it. You’re texting your buddy, and you type out “I wish I were.” But there’s that pesky autocorrect, trying to change it to “I wish I was.” Is autocorrect ducking with you, or are you about to commit a grammar faux pas?

What is the difference between were and was?

Why is I wish I were correct?

So, what happens when you’re talking about I wish I were … ? I is a first person singular pronoun, which is what makes using were seem confusing. Shouldn’t we always use was after I?

I wish I were is actually the preference of grammar experts because you’re talking about something that hasn’t actually occurred. If you want to get a little more formal about it, the past indicative is used for ordinary objective statements or questions, and past subjunctive is used for imaginary or hypothetical statements or questions. Were is always correct in the past subjunctive.

For example, I wish I were on a beach right now with a pile of books is something a dedicated bibliomaniac might say, and we’d love to join them!

How to use I wish I were in a sentence

The subjunctive refers to words that describe doubtful situations—like wishes for things that aren’t real! That’s why you’ll see I wish I were used in these examples:

Why we still hear I wish I was

While grammarians will tell you to stick to I wish I were to follow the rules of the subjunctive, language has evolved, and the non-standard I wish I was has become increasingly popular. Our advice?

If you’re looking to write a hit song, it’s fine to use the less formal I wish I was. If you’re writing a paper for your English professor, on the other hand, stick with the grammarians, and use I wish I were.